Nice anchorage, protected from all winds between islands Frašker, Fraškerić and the mainland. Anchoring is good, and the sea crystal clean. During the approach one should take care of the traffic all around if, and a lot of swimmers, especially in front of the camp on the NE side of the island Frašker. The curiosity Frašker island are the remains of a shipwreck and mast sailing ship anchored in the shore underwater cliff. Patchwork wall is breathtaking. To 18 m is a semi-circular opening which can pass on the other side. According to the southern side of the island at a depth of 8 m, there is a cave. Rocky coast is covered with colorful flora, and abundant fish and flocks.

UNIJE overnight distance 20NM
Unije, the largest of the islands surrounding Lošinj, was populated through all historical periods due to good geographical and traffic position at the entrance of Kvarner, several sources of fresh water and broad fertile land. Both the northern and eastern sides of the island are steep and rocky, overgrown with evergreen holly-oak, while the southern and western sides are more unbroken and form a bay where only here one can see mirrored in the sea the facade of its houses and fertile fields. This is an island of olive groves whose branches bear witness to their distant past. The highest point of the island is Kalk (132 m.).
It is suggested that those arriving on the island with their own boat should use the more accessible western side of the island, in the bay of Maračol, where the sea is deepest. There are no cars on the island. In the village there are several restaurants, patisseries, bakeries, a post office and grocery stores. A regular shipping line connects the island with Lošinj and several times a week the island is linked by catamaran with Rijeka.

Susak is a small island located in the north of the warm Adriatic sea (Mediterranean). It’s famous for it’s sandy beaches, beautiful folk costumes and yellow dost from which the island made. It is this yellow dust which makes Susak unique - even the the most experienced seamen will agree there’s no similar island in the whole Mediterranean! Getting to Susak is not an easy task, while finding accommodation is even tougher. These two facts have kept the island of the touristic agencies radars. Most of them are totally unaware of it’s existance, which is a good thing since it keeps crowds off the island. On the island there’re no roads, noisy night clubs - there are only miles of dusty paths running across sand cascades, which connect the only village with coves on the other side of the island. During winter island is practically deserted. The only 200 people who live there throughout the year are the people who stayed behind during the big emigration wave to he United States. On Susak a special dialect is spoken, which is so different from standard Croatian that nobody in Croatia understands it. 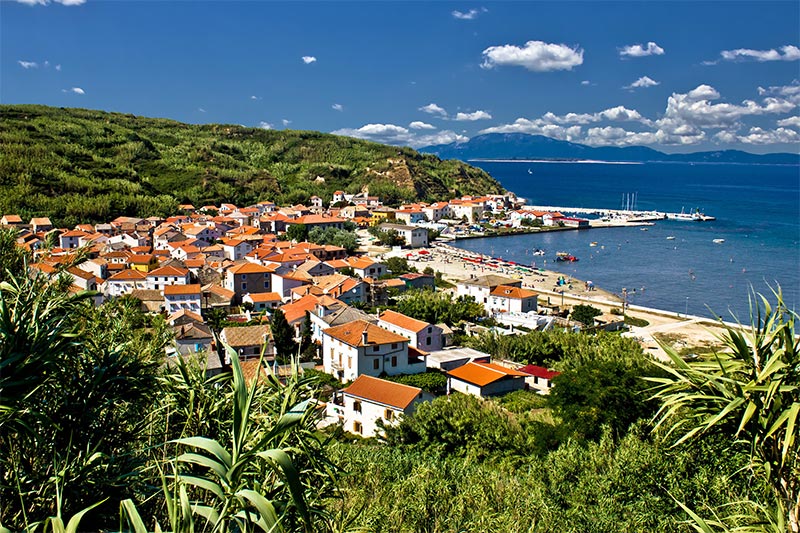 SLEEPING IN MALI LOŠINJ 5NM:
Mali Lošinj is the biggest settlement on the island, found on the southern side of the Bay of Lošinj, which thanks to this position has become a very important maritime and commercial centre, and today, also an important tourist destination. Positioned in the August Bay, the biggest closed bay of the island, and with 7000 inhabitants, today it is the biggest island town in the Adriatic. Today Mali Lošinj is one of the main tourist centres on the Adriatic known in all European tourism circles, which is proofed by an ever bigger number of guest that visit the island every year.
Mali Lošinj was the recipient of the title „Champion of Tourism 2007“, and for 2009, Mali Lošinj is the Croatian candidate for the Golden Flower of Europe 2009. 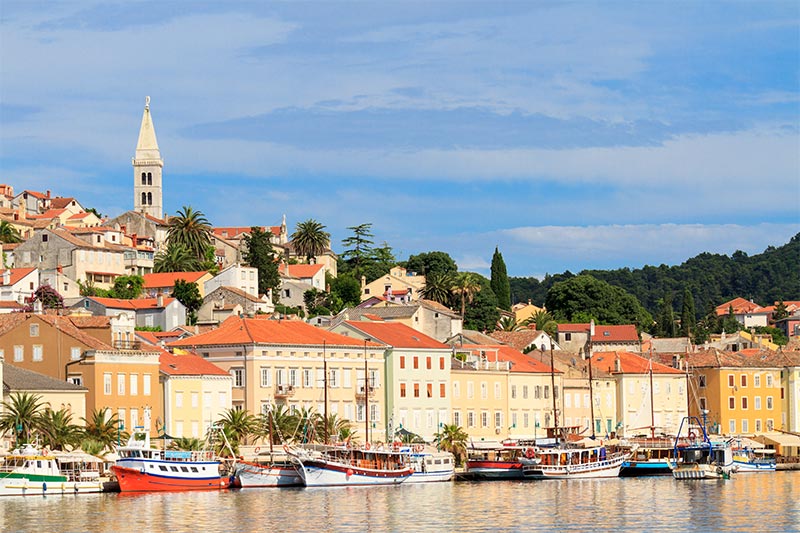 The Ilovik harbor is 1.5 km long and up to 300 meters wide. There are 80 buoys available for mooring, these are located throughout the entire length of the canal.
On the docks, there are approximately 30 permanent anchors available for public use. At most locations, you will have an opportunity for 220 V electrical hook-up. Small quantities of water can be obtained from the town cistern in front of the church. Rubish removal is scheduled for all vessels. The harbor of Ilovik is likely one of the more beautiful and secure harbors on the Adriatic.

Pržine is a sandy beach located on the island of Ilovik. Distance from the centre and the port: 30 minutes on foot.

SLEEPING IN PREMUDA 10NM:
Premuda is a little island and it belongs to the north Dalmatian islands which are situated north-west from the county center Zadar. Premuda is approximately 10 km long, up to 1 km wide, and has an area of 9.2 km2. It is situated southwest of Silba and northwest of Škarda .
The town of Premuda has about 50 inhabitants but the population strongly varies during the summer season. The population of Premuda is cultivating olives and breeding sheep and in the last few years they have become involved with the tourism.
Premuda is a popular destination among nautical and diving tourists. Premuda has some very popular diving spots. The "Katedrala" is a system of connected caves with beautiful light rays that fall through the porous ceiling of the caves. An also famous diving spot is the wreck of the World War I Austro-Hungarian battleship SMS Szent István, which is located in a depth between 40–60 meters (131–199 feet) and accessible only by experienced divers.

Two lovely Croatian Islands: Palacol, the smaller, and Oruda, have beaches, Mediterranean vegetation, some fauna and flora. Palacol, from the Italian "Palazzo", is named after the walls that are visible from afar. Some sources say the building was destroyed in the 13th century when they were settled by pirates, maybe it was a fortress. The locals say it was a monastery, but why then was the church built on the larger island of Oruda? Locals also tell of an underwater tunnel, buried treasure and many more tales. The island is about 3.6 hectares and is limestone rock covered with red soil. There are no trees only tall grass and wild hemp and in the southern part cormorants nest and lizards and a few sheep make up the island population. Oruda has an area of around 42 hectares and is partially covered by Mediterranean maquis. The middle part has hundreds of old olive trees and in the southern part are fig trees. There are also lots of wild blackberries and wild asparagus. The fauna consists of sheep and rabbits, and cormorants nest mainly on the north side. There is a fountain with running water and a well about 9 meters deep. On the west side, and the south side
Palacol, there is a sandy beach. A rocky beach is located on the north side of the island, and the rest of the coast is rocky. Sea surroundings of the island offers excellent opportunities for underwater activities.

SLEEPING IN RAB: 18NM
Rab island covers 93.6 square km. It is one of the greenest islands in the Adriatic and probably one of the most magical. It is covered with pine forests and has beautiful sandy beaches, and is well known for its mild climate which differs from the mainland. The reason for this is that three ridges are present which protect the island from cold winds from the Velebit mountains.
The main resort, Rab Town, is full of medieval buildings, built during the Venetian rule, which occurred since the 13th century. The old town walls are still visible in some places.
Other than the small town of Rab, there are 7 idyllic places on the island situated on different parts of the island: Barbat, Banjol, Palit, Kampor, Mundanije, Supetarska Draga and Lopar.

Approach: Care should be taken of Kolorat shoal (4.5 m) some 500m N of the point of the same name and Matesic shoal some 750m NW of Tanki point. The dangerous area is marked by the red sectors of the coast lights on Suha point and Bik rock. Mooring: The anchorage is sheltered from all winds.
Smaller craft can anchor off the NE coast in depth of 3.5 m; good holding.

Punta Križa/island of Cres 5NM
Punta Križa is situated in the south-east of Cres. Because of its low position, it is visible from all sides.
Punta Križa is a place where the intersecting village roads lead to numerous shepherds' lodges. The ground is covered with Holm-oak, which is the best wood for heating. The dense woods provide shelter for a number of wild animals, such as fallow deer, pheasants, rabbits and wild ducks.
This is a favourite bathing and anchoring place for sailors. The beautiful bays with their rocks and sandy bottoms are suitable for anchoring. The bays are protected from the sirocco and partly from the bura.
The most beautiful and popular bays are: Kolorat, Majiške & Ul

SLEEPING IN NEREZINE (LOŠINJ): 5NM
Nerezine is the first place we encounter on the island of Lošinj. It is situated at the foot of Osoršćica hill on the north eastern coastline of Lošinj and was already mentioned as a larger settlement on the island as far back as the 14th century.
As a tourist resort, Nerezine was already discovered in the 19th century, primarily thanks to Osoršćica hill which delighted all its visitors, including the Austro-Hungarian heir to the throne, Rudolf Habsburg, who climbed to the top in 1887. Nerezine is the starting point on the tourist trail for the ascent to Osoršćica and it is not without reason that it has been proclaimed the most beautiful island mountain in the Adriatic. 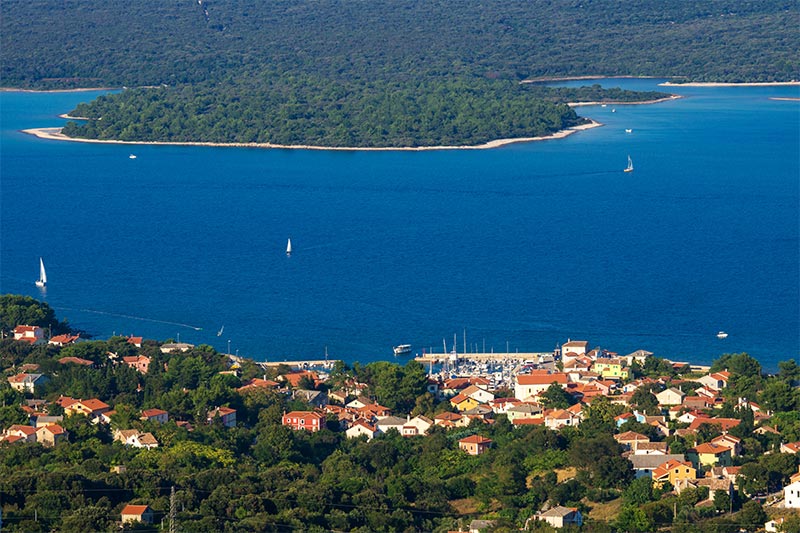 Lubenice is an ancient fort city on the island of Cres, that was founded approximately four thousand years ago on top of a 380 m high ridge that overlooks the Adriatic Sea. It is a small local center that comprises forty buildings and twenty-four permanent inhabitants. Buildings in the city are constructed out of the same material as the surrounding cliffs and there are two well-preserved extant city gates on the North and South of the city as well a wall in the East. It was nominated to be a UNESCO World Heritage site in 2005.

SLEEPING IN TOWN OF CRES: 10NM
Cres is basically a city on the bay, as its town docks come directly into the middle of the city and are filled with boats. There is a car park at the entrance to the city, along with multiple restaurants and a gas station. Upon entering the city through one of the gates there are narrow paths you must walk through, of houses and small stores. In the center there is an open piazza, with people selling different homemade goods. There are also shops and open air restaurants in which people can sit on the edge and watch the boats come in. Cres is home to a Blue-Flag-status marina, that is on the outskirts of the city. This is separate from the concrete center docks seen inside the actual city. The marina is home to ships of many people on the island and is also home to a dry dock where many ships are repaired.

In Portić Bay on Cape Kamenjak, anchor can be dropped at a depth of about 6-8 metres. The bay offers shelter from all winds except the bura. 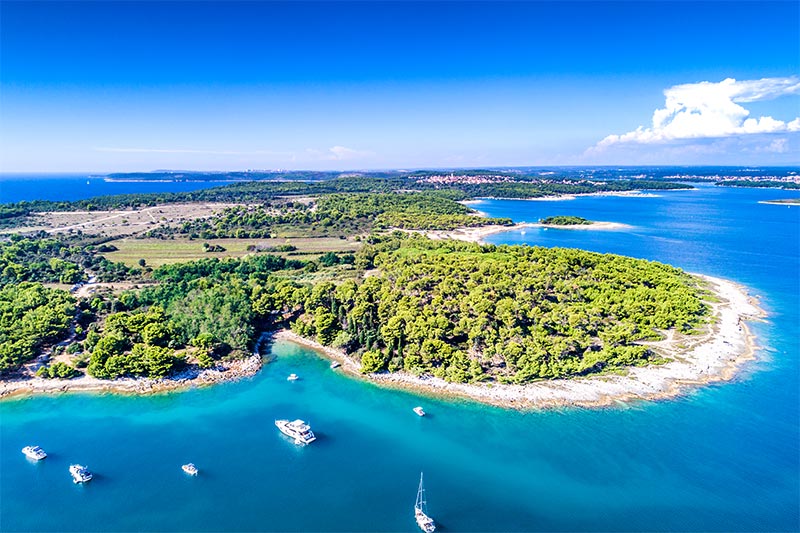