Every year Brijuni is becoming more popular and attractive as a destination for boaters, who spend several days on the island relaxing and enjoying the rich variety of offer. When you arrive on the island the CONCIERGE SERVICE STAFF will do its best to make your stay on the island as interesting and pleasant as possible: from organizing excursions by electric cars or bikes, playing golf, tennis, to gala lunches or dinners at unique locations, at sunset or with flambeaus...
The reception desk is located in the Hotel "Neptun".
For all information please call +385 (0)98490792

MALI BRIJUN – THE NEW NAUTICAL DESTINATION!
St. Nicolas bay on the Island of Mali Brijun is the new nautical destination inside Brijuni archipelago. Mali Brijun with the suface of cca 100 ha once was forming part of Veli Brijun. Today these dwo islands are divided by Tisnac channel which is 120 m wide and 2-3 m deep. Low-lying shore of Mali Brijun is full of shingle beaches and gentle bays…
Choose yours, surrounded by silence that is completed with summer sounds; nobody around you, maybe just in the next bay… For your refresh on the island there is a bar – restaurant which emits a frendy atmosphere, the only one you may meet in the docile wildness of Mali Brijun.
The guests that arrive with their own boats on Brijuni Islands are required to contact the hotel reception situated in the main harbor.

Once a mussel farm, today famed for its marina, Pomer lies in a well-protected part of Medulin Bay. The marina provides 250 berths and 50 boat places on land, together with all necessary facilities.
In summer folk festivals are organized, as well as chamber music concerts held in churches. Following the fishing tradition, there are several well-known seafood restaurants. You can also find here a shop, bakery and other amenities. This small fishing town has preserved its peace and quiet until today. 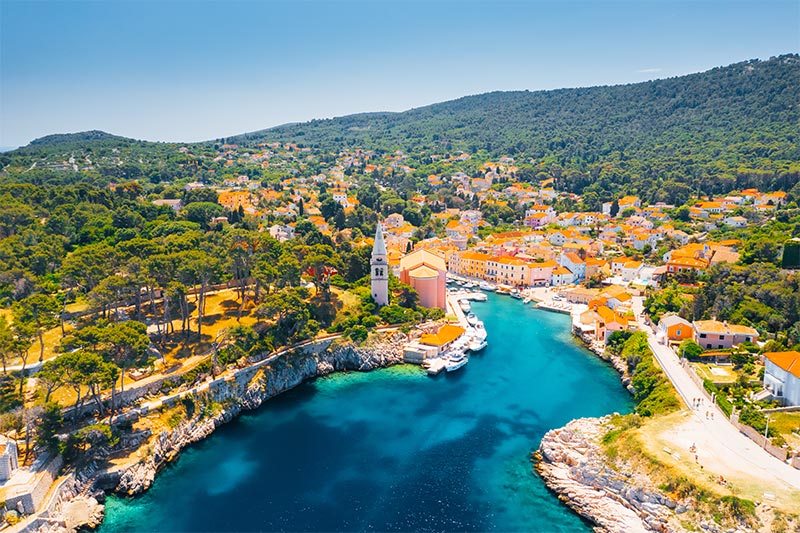 Mali Lošinj is the biggest settlement on the island, found on the southern side of the Bay of Lošinj, which thanks to this position has become a very important maritime and commercial centre, and today, also an important tourist destination.
Positioned in the August Bay, the biggest closed bay of the island, and with 7000 inhabitants, today it is the biggest island town in the Adriatic.
Today Mali Lošinj is one of the main tourist centres on the Adriatic known in all European tourism circles, which is proofed by an ever bigger number of guest that visit the island every year.
Mali Lošinj was the recipient of the title „Champion of Tourism 2007“, and for 2009, Mali Lošinj is the Croatian candidate for the Golden Flower of Europe 2009.

Olib is an island in northern Dalmatia, located northwest of Zadar, southwest of Pag, southeast of Lošinj and just east of Silba with an area of 26.14 km2. The products of Olib include wine, olive oil, and cheese.
Olib has no native freshwater sources. Consequently, nearly all homes on the island are built with cisterns to capture rainwater. There are also two communal wells available to residents.

Although the year-round population only hovers around 100, that number swells during the summer months when both ancestors of the island's native population as well as international tourists come to enjoy the ample sea, sun, and relaxed atmosphere.

Olib is connected to the mainland by ferry to Zadar via the islands of Silba and Premuda. The journey to the mainland takes approximately two hours on a catamaran or three to five hours on a car ferry. Cars are forbidden to be used for transport on the island, instead having to be parked in a designated area
adjacent to the harbor.

Susak is a small island located in the north of the warm Adriatic sea (Mediterranean). It’s famous for it’s sandy beaches, beautiful folk costumes and yellow dost from which the island made. It is this yellow dust which makes Susak unique - even the the most experienced seamen will agree there’s no similar island  in the whole Mediterranean! Getting to Susak is not an easy task, while finding accommodation is even tougher. These two facts have kept the island of the touristic agencies radars. Most of them are totally unaware of it’s existance, which is a good thing since it keeps crowds off the island. On the island there’re no roads, noisy night clubs - there are only miles of dusty paths running across sand cascades, which connect the only village with coves on the other side of the island. During winter island is practically deserted. The only 200 people who live there throughout the year are the people who stayed behind during the big emigration wave to he United States. On Susak a special dialect is spoken, which is so different from standard Croatian that nobody in Croatia understands it.

Unije, the largest of the islands surrounding Lošinj, was populated through all historical periods due to good geographical and traffic position at the entrance of Kvarner, several sources of fresh water and broad fertile land.
Both the northern and eastern sides of the island are steep and rocky, overgrown with evergreen holly-oak, while the southern and western sides are more unbroken and form a bay where only here one can see mirrored in the sea the facade of its houses and fertile fields. This is an island of olive groves whose
branches bear witness to their distant past. The highest point of the island is Kalk (132 m.).
It is suggested that those arriving on the island with their own boat should use the more accessible western side of the island, in the bay of Maračol, where the sea is deepest.
There are no cars on the island.
In the village there are several restaurants, patisseries, bakeries, a post office and grocery stores. A regular shipping line connects the island with Lošinj and several times a week the island is linked by catamaran with Rijeka.